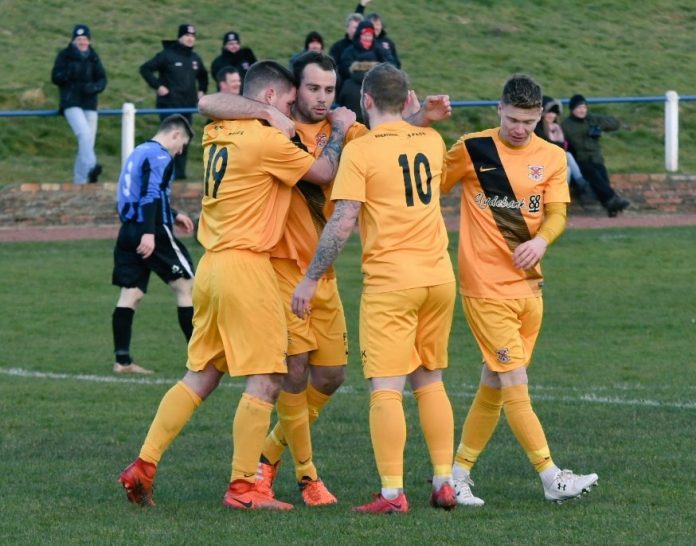 Clydebank climbed off the bottom and out of the play-off places with a comprehensive 3-0 win over Girvan on Saturday.

A double from on-loan Alloa striker John Cunningham and a second half strike from Steven Higgins saw Bankies pick up just a second league win of the season.

Manager Kieran McAnespie made three changes from the side that beat Lugar last month, with Andy Paterson, Ryan Deas and Steven Higgins all coming into the starting eleven as Bankies lined up in an attacking 4-4-2 formation.

Making his league debut, Higgins was lively from the off – twice testing Girvan stopper Mark Higgins with long range drives.

The visitor’s persistence paid off midway through the half when they eventually broke the deadlock. Alan Vezza, deployed at right back, glanced a header back across goal for Cunningham who took a touch before coolly slotting the ball through Higgins’ legs to grab his first league goal in Clydebank colours.

Bankies were forced into a change at the break when Jordan Shelvey pulled up with a back injury, with academy graduate Matt McLean replacing him on the left flank.

Five minutes into the second period, Bankies doubled their lead. Black, who proved to be a driving force in the midfield, burst forward again and sent Higgins through on goal. His initial shot was blocked by the legs of Girvan stopper Higgins, but the striker pounced on the rebound to net from a narrow angle. 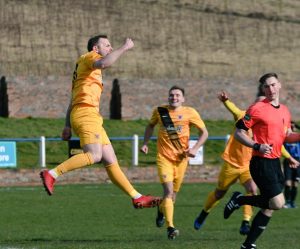 Midfielder Ryan Deas was next to try his luck from distance but his ferocious drive from 30 yards flew narrowly wide of the right hand post.

And recent signing Cammy McClair could’ve grabbed his first Bankies goal after a powering run down the channel but his right footed effort hit the side netting as Clydebank looked to put the game to bed.

The hosts should’ve halved the deficit on the 80 minute mark when Girvan substitute Darren Mitchell squared the ball to striker Michael Reilly but the Bankies back line cleared to safety.

And with two minutes remaining Cunningham grabbed his second and Clydebank’s third goal of the game to ensure all three points. Chris Black played threaded a thorough ball into Vezza down the right, with the Clydebank captain selflessly slipping the ball across goal for Cunningham to slot home

Higgins went in search of his second and Bankies’ fourth of the afternoon with a wind assisted effort from 30 yards, but to no avail as Clydebank held on for just their second win and third clean sheet of the season.