When the Trust began in 2002 one of the founding ideals was that it should try to increase membership and generate interest from the local community – but also intended to support the local community and give something back. Over the years we have worked with other community groups and a number have attended home matches of Clydebank FC as our guests.

The Trust has a strong record of backing sports teams and individuals in the local Community. Various examples are pictured on this page (and a few blasts from the past!), but beneficiaries of Trust sponsorship are Clydebank Juveniles, Drumchapel Amateurs girls, Drumchapel United 2001, and The UCS team.

For the 2015-16 season, the trust has sponsored Clydebank FC 2005’s – as helped run by our goalkeeping coach Allan Hamilton and former player Kevin Stanley – and Clydebank U17s (formerly Milngavie Wanderers).

UCS Trust members have been instrumental in the maintenance and improvements to Holm Park in order to host Junior football matches. Bankies volunteers have been down at Holm Park doing essential maintenence and working on the pitch and surroundings. In the last few years, the pitch has undergone significant drainage upgrades, and the stand side terracing has been re-surfaced amongst a thousand other smaller jobs. On matchdays the Trust volunteers have provided stewarding for the ground and this energy and effort has enabled the town to host its largest attended football events since the closure of Kilbowie Park in 1996. 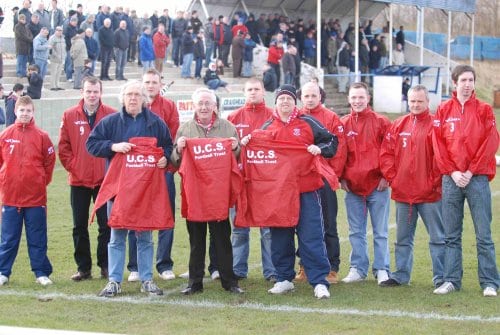 Show Racism the red Card
The Bankies became one of the first Junior football sides to sign up to this campaign, and now take part in the events that take place every year. The Trust organise free match day tickets for interested groups on the “show Racism the red card day”, and local politicians and dignitaries are invited to join the players of both sides by holding up the red card symbol prior to the match. This campaign has gained national media coverage, and is becoming stronger every year.

The Clydebank FC players show the red card at the 2015/16 Show Racism the Red Card day of action.