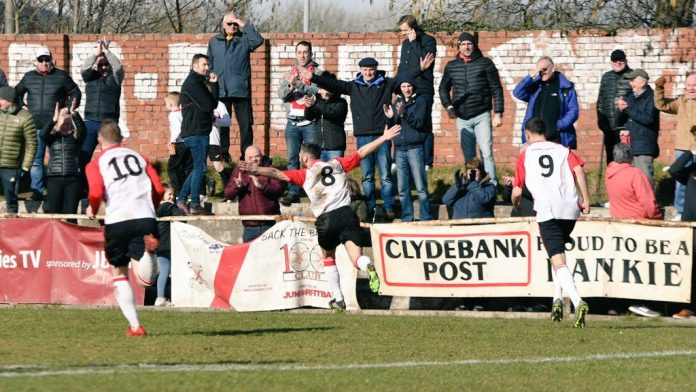 Clydebank came from a goal down to make it back to back wins for the first time this season with a 3-1 victory over Auchinleck Talbot on Saturday.Â

Steven Higgins grabbed a brace on his home debut while Ryan Deas was also on the scoresheet as Bankies move up to eighth in the table.

Boss Kieran McAnespie made just one change to the eleven that swept Girvan aside last week, with Reece Pearson replacing Chris Black in the heart of midfield.

It was a poor start as the visitors went ahead inside the opening ten minutes. Mark Shankland burst down the left channel and hit the byline, before crossing to the back post where Dwayne Hyslop coolly nodded in the opener.

And it could’ve got worse for Bankies when Talbot punished the home side down the left channel again, but Andy Paterson put his body on the line to deny Auchinleck an almost certain second.

Paterson came to the rescue once again moments later as he headed Hislop’s header to safety as Bankies continued to ride their luck.

The home side came flying out the traps in the second half and squandered two opportunities to level. First, Higgins’ ferocious drive flew narrowly wide of the post before Jamie Darroch’s header also missed the near post after Deas’ clipped free kick.

Five minutes into the half, Clydebank deservedly equalised. Higgins received the ball on the edge of the area and cut inside before curling a right footed shot high into the top corner as Bankies began to turn the screw.

McAnespie’s men were in the ascendancy and went in front soon after. Quick feet from Deas saw him drag the ball away from the advancing Talbot defence and Leishman was unable to prevent the midfielder’s driven daisy-cutter from nestling in the bottom corner.

On the hour mark, Bankies extended their lead in fine fashion. Not content with one goal, Higgins latched on to a hopeful long ball into the channel and audaciously dinking the ball over the towering Leishman.

There was time for Bankies academy graduate Ross Alexander to make his first team bow, with the midfielder replacing Cammy McClair.

And as the clock ticked down, the home side went in search of a fourth but Deas’ right footed free kick was palmed away to safety and Clydebank held on to claim back to back wins for the first time this season.