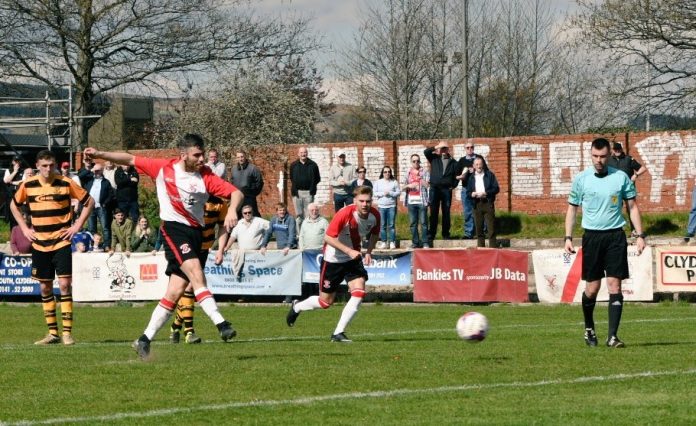 Ten man Clydebank took a step towards survival with a 1-0 win over Kilbirnie Ladeside on Saturday.

Bankies played more than an hour with ten men after Steven Higgins was sent off, but Ryan Deas’ second half penalty was enough to get Kieran McAnespie’s men back to winning ways.

McAnespie – commencing a six match touchline ban – made three changes to the side that lost to Arthurlie, with Chris Dooley, Ross Forsyth and Jordan Shelvey all earning a recall to the starting eleven.

It was the first time former Bankies boss Budgie McGhie had returned to Holm Park with his Blasties side, and it was they who looked the livelier of the sides in the opening exchanges.

But the most controversial moment of the came after just 23 minutes when striker Higgins appeared to be blocked as he was bearing down on goal. Unhappy with the decision, Higgins was initially cautioned for dissent, before being shown a straight red card for allegedly spitting close to referee Garry Doherty.

Despite the man advantage, Kilbirnie failed to capitalise – with only Reece Williamson’s half volley troubling Waters as the teams went in level at the break.

Bankies’ persistence paid off when they were awarded a penalty on the hour mark. From an out-swinging free kick, Ross Forsyth was dragged to the ground by Dominic McLaren, with Doherty quick to point to the spot.

Ryan Deas assumed responsibility and sent Hughes the wrong way to claim his fourth goal of the season.

The home side looked to grab a quick fire second to settle the game, and should’ve found it when Alexander and Shelvey combined on the edge of the area, but Shelvey’s tame shot didn’t trouble Hughes.

Former Bankies Mark Burbidge and Peter McGill both tried in vain to get their side back into the game but young full backs Chris Dooley and Matt McLean held firm.

Seven minutes from time, hopes of a just a third league clean sheet looked in doubt when referee Doherty penalised Jamie Darroch for an alleged handball inside the area.

Local lad Jon Scullion struck the spot kick well, but Waters flew low to his left to save his second penalty in as many weeks.

And there was to be no late drama as Jamie Darroch cleared the ball off the line in the dying seconds as Bankies held on for an invaluable three points.

Next up for Bankies is the visit of Kirkintilloch Rob Roy, and kick off at Holm Park on Monday evening is 6:45pm.